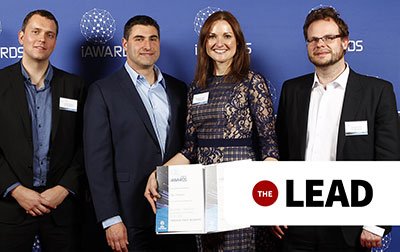 An American study into the effectiveness of using artificial intelligence to accurately detect defects in human embryos ahead of IVF treatment has taken the screening technology a step closer to commercialisation.

Life Whisperer is a non-invasive, scalable and secure web-based tool that can be utilized by IVF clinics globally. Clinicians can simply “drag and drop” patient embryo images taken from a standard microscope and receive an instant report on the embryo viability to inform their decision of which embryo to implant into the patient.

In the Ovation Fertility study, the Life Whisperer AI technology showed a 50 per cent improvement in the prediction of successful implantation – the critical first stage of a successful pregnancy – when compared to standard embryo morphological grading by highly skilled embryologists. This is the first study in the US to successfully apply AI by deep learning through computer vision to embryo selection.

The Adelaide-based company plans to perform additional validation studies in a number of clinics in the US before seeking regulatory FDA clearance for sale of the product in the American market in early 2019.

She said the Ovation Fertility study was a “major milestone” and the results would underpin the regulatory applications to the FDA.

“It’s very important to have a large and diverse data set that underpins the final model we will take to market and to ensure that technology is transferrable to different clinical settings,” Dr Perugini said.

“We do have a global outlook but I think our most aggressive target in 2019 will be in the US and then we’ll scale to those other markets from that point.

“We’re already seeing within the industry even the knowledge of us working with this partner in this space has increased significantly the amount of interest from the major players in the US and other markets to really jump on board and support not only the testing but the use of this technology for their patients.

“We’ve been able to land a very reputable partner in the US so that certainly helps with accessing a very large market, which is dominated by a few large players.”

The current gold standard for embryo analysis is pre-implantation genetic testing (PGT), in which a few cells are removed from each embryo and sent to a specialized genetics laboratory for next generation sequencing. PGT can accurately detect chromosomal abnormalities, so that only chromosomally normal embryos are chosen for transfer to the patient’s uterus.

It is most commonly used in the United States – some US fertility practices now make PGT part of their standard IVF protocols – but not all patients choose to have the procedure performed for financial or other reasons.

Dr Perugini said the technology worked well with existing approaches including PGT but was also valuable to those patients not choosing to undergo PGT.

She said Life Whisperer was also in the early stages of a study with Ovation Fertility to determine whether or not the same approach could be used to detect genetically defective embryos rather than just their general viability.

“If you have a genetically healthy embryo, developmentally it still may not be a high potential embryo and vice versa, which is why we are positioning this as a pre-screening approach to be used in concert with some of those other technologies.

“If you are going to take cells from a developing embryo for genetic screening you want to make sure that it’s a high potential embryo that has a high likelihood of success before you go to the extreme extent of testing.”

Ovation Fertility provided several thousand photos of embryos from completed IVF cycles, taken before biopsy and transfer. Results of the AI analysis of these images were compared to Ovation Fertility’s documented corresponding chromosomal test result or pregnancy outcome for each embryo, along with the morphological grade assigned by the embryologist.

“The only way to definitively determine if an embryo has genetic defects is PGT, but it is a costly and invasive method,” said Ovation Fertility’s Austin Laboratory and Operations Director Dr Tex VerMilyea.

“AI can be a useful pre-screening tool that would allow us to identify and genetically test only those embryos which are viable, with a low likelihood of genetic defects. This can result in significant cost savings for Ovation patients, and also has the potential to improve pregnancy success.”

Dr Perugini said when the embryologist made an initial assessment of embryos down the microscope in a clinic they would simply drag and drop camera images of embryos directly onto the web-based Life Whisperer system to get an instant answer to support their decision about which embryo to transfer.

“The beneficiaries of the technologies are the mums and dads undergoing the IVF and they are the ones we are hoping will push their clinics to take up this technology,” she said.

“It will be a pay per use charge to the patient and it will be a small cost relative to the overall IVF charge that will give them great assurance around the likelihood of success of the embryo that is selected.” 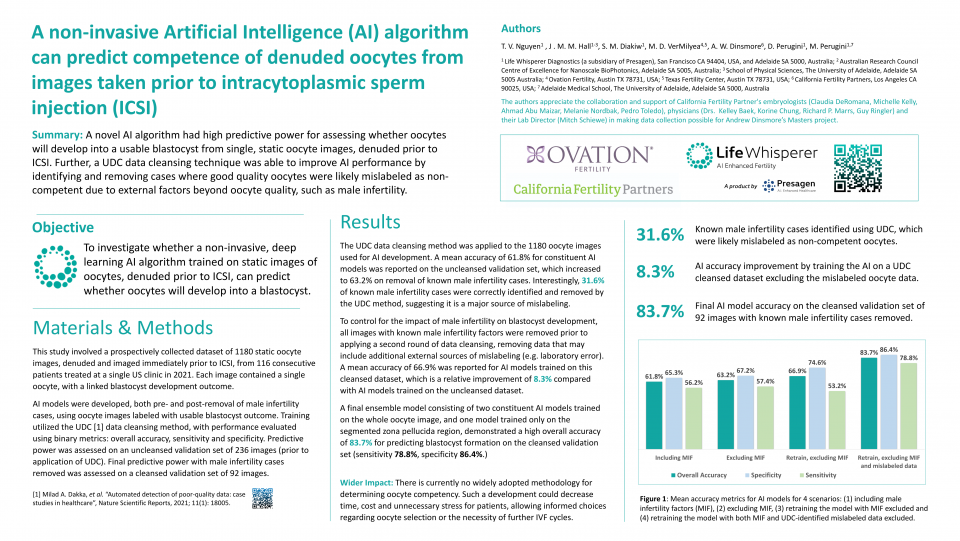 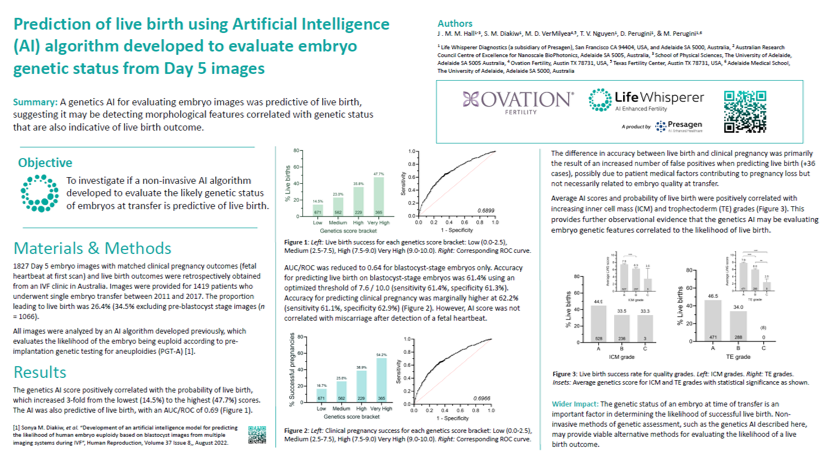 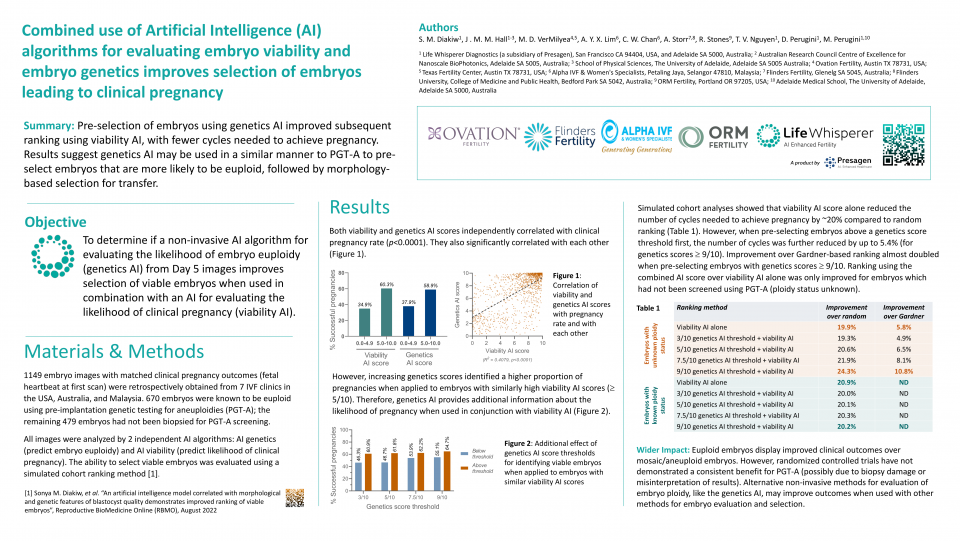 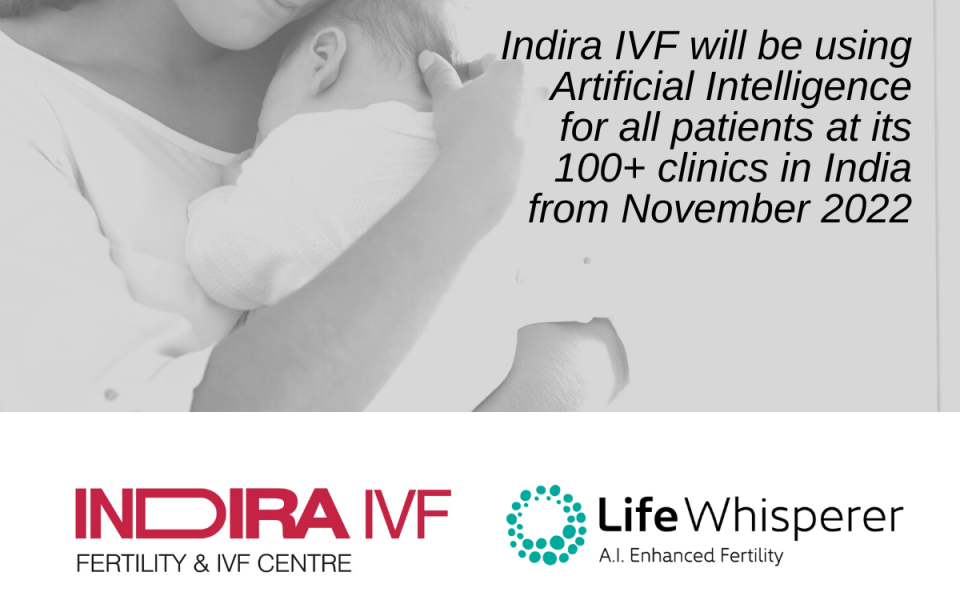