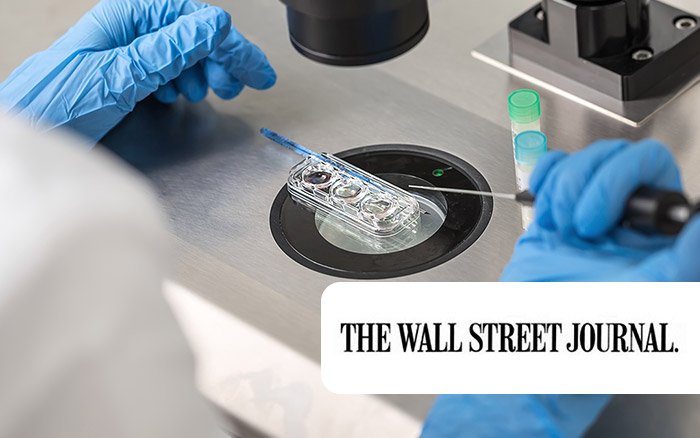 Trying to get pregnant with in vitro fertilization is a gamble. But some fertility doctors think artificial intelligence could help tilt the odds in their patients’ favor.

Currently, birth rates from IVF vary widely, from 31% for women age 35 and under to around 3% for women age 42 and older when using fresh embryos, according to the Centers for Disease Control and Prevention. To get pregnant, many women ultimately have to go through multiple rounds of IVF. The process can be time-consuming, emotionally exhausting and expensive.

Now, as more women wait longer to have children, some academic researchers and startups are studying ways to use AI in the fertility field. AI, they say, could help patients get pregnant sooner by selecting the most viable embryos. Embryologists think AI can pick up abnormalities in embryos that the human eye can’t see.

“For a lot of patients, it’s cost-prohibitive to have multiple cycles,” says Michelle Perugini, co-founder and chief executive of Life Whisperer, an Australian company that plans to seek permission from the Food and Drug Administration to market its AI-driven embryo-selection software in the U.S. “What we’re trying to do is reduce the number of cycles that any given patient needs to have.”

Researchers are exploring AI for all sorts of medical applications, but so far there’s little real-world evidence that any of them improve efficiency or patient outcomes.

An IVF cycle involves stimulating the ovaries with hormones, retrieving eggs, fertilizing those eggs with sperm in a lab and then transferring the resulting embryo or embryos to the uterus. One cycle can take several weeks and runs $12,000 on average before the cost of medications.

In theory, an AI application would be able to pick out the single best embryo to use for IVF to improve the chances of getting pregnant on the first try. Currently, many IVF clinics offer the option to transfer multiple embryos at once to boost the likelihood of getting pregnant, but delivering multiple babies comes with additional risks, such as defects or premature birth.

To select which embryo to transfer, fertility clinics have long relied on a grading system—think of it like a beauty pageant for embryos. It involves an embryologist looking through a microscope and scoring an embryo based on its size and whether its cells look healthy. But two embryologists could score an embryo differently based on their experience.

“There is no real standardization of embryo assessment,” says Dr. Nikica Zaninovic, the director of the embryology lab at Weill Cornell Medicine.

Some clinics use what’s called time-lapse monitoring for embryo assessment, which takes photos of embryos every 20 minutes or so while they’re grown in the lab. The technique allows embryologists to see if embryos are developing normally, but it still relies on a human assessment to determine which embryos to transfer.

Another option is to genetically test embryos for aneuploidy, or the presence of an abnormal number of chromosomes, which is a major cause of miscarriage. The procedure requires an embryologist to extract a few cells from an embryo with a needle, which can occasionally damage an embryo, making it unusable. The test is also expensive, adding a few thousand dollars to the total cost of an IVF cycle, and it’s unclear whether it improves the chance of getting pregnant.

Life Whisperer is trying to automate the selection process and remove human bias. The company has trained deep-learning algorithms—a subset of machine learning loosely based on how neurons in the brain function—on thousands of embryo images as well as outcome data on whether the embryo transfer resulted in a pregnancy. The program learns from that data so that when it’s presented with an embryo image it hasn’t seen before, it could theoretically classify it by likelihood of pregnancy.

Dr. Perugini says an international study conducted by Life Whisperer shows its web-based application notched a 31% improvement in accuracy at selecting viable embryos compared with standard visual assessment. The study, which hasn’t been peer-reviewed, involved images from 1,600 patients across 12 IVF clinics in the U.S., Australia, Malaysia and New Zealand.

Dr. Perugini declined to say how much the test would cost patients, but said it would be an “extremely low cost.” The company is currently seeking permission in Australia and plans to seek permission in the U.S. and Europe to market and distribute their program.

Dr. Zaninovic and his team, meanwhile, are working on a similar approach. They trained an algorithm on 12,000 images of good and poor embryos based on the grade given by embryologists, and validated it with an additional 1,900 images. The algorithm was 98% accurate in predicting whether an embryo was of good or poor quality, compared with the human assessments. By combining the AI assessment and maternal age, “we can predict pregnancy chance for each embryo,” Dr. Zaninovic says. The results appear today in the peer-reviewed journal Nature Digital Medicine.

Another Australian company, Harrison.AI, is developing a similar AI system to predict whether a particular embryo will progress to a fetal heartbeat. ​The automated system was 93% effective at choosing which embryos led to a pregnancy, according to an abstract presented by the company at the American Society for Reproductive Medicine’s annual conference in Denver, Colo., last year. The company did not respond to a request for comment.

None of these AI programs has been used on patients, only on historical data. A major test will be using them in a clinical trial to compare birth rates between IVF patients whose embryos are evaluated with AI versus those that get standard visual assessment.

​Dr. Eric Topol, a physician and executive vice president of Scripps Research, believes AI could be a game-changer for women and couples looking to conceive. “I think the application of deep learning AI for embryo selection and IVF could be exceedingly important, in light of the frequent failures,” Dr. Topol said. “This could prove to be one of the most important applications of AI in medicine but will require prospective validation at scale.”

It might seem counterintuitive that IVF clinics would be interested in this technology, since it could mean performing fewer cycles, eating into revenue streams. But Matthew VerMilyea, an embryologist at Ovation Fertility, a Texas-based IVF lab that partnered with Life Whisperer for its study, said AI could be good for clinics’ bottom line. “If we’re able to get patients pregnant faster with a healthy baby, that allows us to bring in the next couple that needs treatment more quickly,” he says.

If a woman starts out with low-quality eggs, he says, then the embryos will also be poor quality. As a result, an AI program might not find any viable embryos for transfer. Plus, other factors like smoking, weight, the health of the uterus and even the fertility clinic can affect the success of IVF, says Dr. Gleicher.

Still, she’s optimistic that AI is the next frontier of fertility treatment. Eventually, other types of data could be added to AI models to better predict the success of IVF. One Los Altos, Calif.-based startup, Univfy, is using AI to generate personalized reports that incorporate health data, medical history and other metrics, to estimate a patient’s chances of getting pregnant with IVF. For now, Dr. Curchoe says, embryo selection is just “one piece of the bigger puzzle.”

Corrections & Amplifications
Univfy is based in Los Altos, Calif. An earlier version of this article incorrectly stated that the company is based in New York. (04/04/2019)